Has The Economy Hit Bottom Yet? 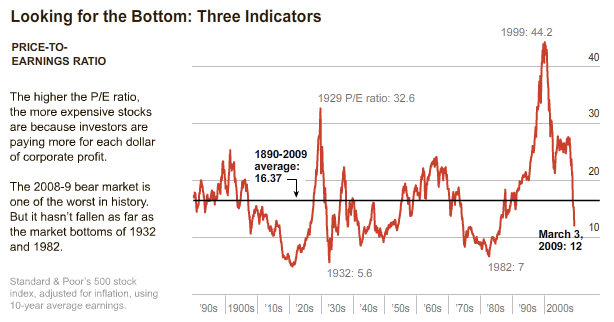 This graph is very interesting (from The New York Times). It shows the price-to-earnings ratio and gives us hope for the future as well as some relief that the bottom is not far away – if not here already. On the other hand, you can see that there is a possibility we will get to the lows of the 20’s, 30’s and 80’s – which means more pain on the way.

END_OF_DOCUMENT_TOKEN_TO_BE_REPLACED

April 26, 2017 > Update > Wow, watching this video again eight years later is an eye-opener. The US Federal debt has climbed to almost $20 Trillion. Clearly, the core issue of too high spending and too low income has not been solved.

Government finances operate on the same principles as business and personal finances, with the exception that we don’t work for the stockholders, and don’t serve the interests of all citizens. It is possible to predict the future by looking to the past. get ready for another crash. Check out the US Debt Clock > here.

March 17, 2009 > This video is very well done. I.O.U.S.A. boldly examines the rapidly growing national debt and its consequences for the United States and its citizens. The graphics are awesome and the content is very well presented. The full version is available (highly recommended) on DVD from PBS.

Towers of Glass, Feet of Clay

I have been reflecting further about the “financial crisis,” and recalling a book I read in 1982 called Towers of Gold: Feet of Clay – the Canadian Banks, by Walter Stewart.

In a conversation about this with my colleagues I happened to say towers of glass, and perhaps 27 years later, Glass is more descriptive. In 1982, I was working in the oil and gas industry in Canada and this book was written about the Banking Industry, the mortgage crisis and the oil prices. These themes are again relevant in 2009.

END_OF_DOCUMENT_TOKEN_TO_BE_REPLACED

What Is the Credit Crisis?

Check out the below video about the credit crisis, what caused it, how it is escalating and what the connection is between house owners, brokers, bankers and Wall Street.

Even if you understand the dynamics of the crisis, this video can help you to explain it clearly to others.